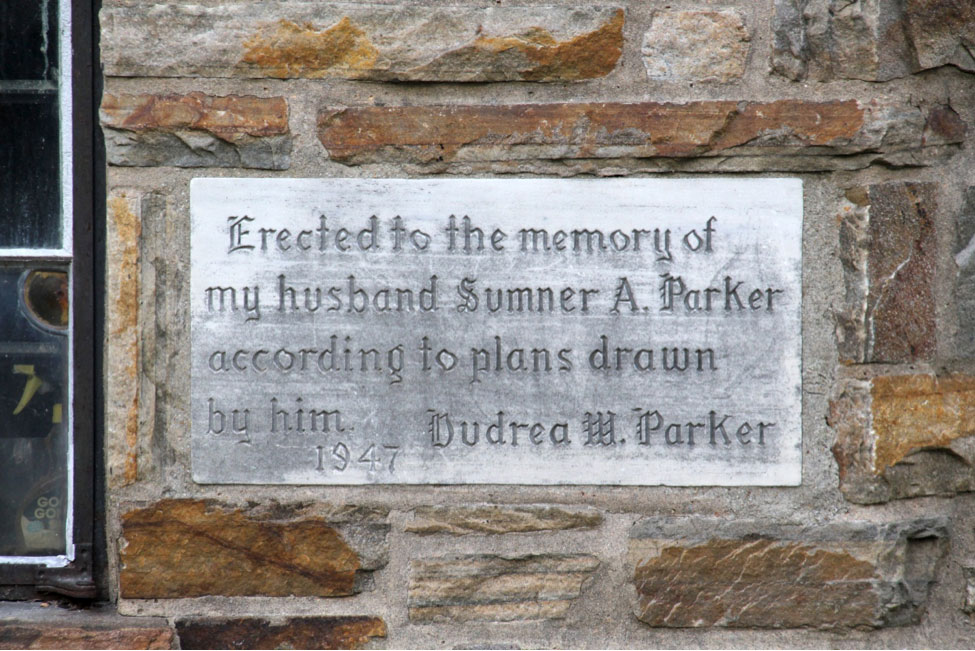 The Cloisters is much more than simply a beautiful wooded estate and a spectacular event venue.

The Cloisters also represents the life’s work of Sumner A. Parker (1881-1946) and his wife G. Dudrea Parker (1883-1972), who dared to dream of constructing an authentic Gothic manor house in the Maryland countryside.  The Parkers spent the decades between their 1905 marriage and the outbreak of World War II working towards this goal.

To this end, they traveled extensively throughout Europe, collecting artwork and artifacts as well as architectural elements and antique furniture.  All of these were shipped to a warehouse in Baltimore, where they were stored while the Parkers meticulously prepared to build their unique home. Finally, Mr. and Mrs. Parker found the ideal location, 60 wooded acres on a hilltop in Baltimore County that reminded them of their favorite part of France, and began construction around 1929.

The house took three years and $50,000 to complete.  In order to achieve an authentic look and feel, Mr. Parker based the design for the house on sketches that he had made of European country manors.  He and Mrs. Parker chose random-sized blocks of grey and gold Butler stone for the walls of the house and flagstones of the same material for the roof.  These flagstones, which are an inch thick and up to 12 inches across, weigh as much as 210 pounds each and form a massive roof that is the only one of its kind in the United States. The Parkers’ attention to detail extended inside the house as well.  For example, each of the massive timbers found throughout the house was painstakingly hewn by hand and then left outside to weather for two years in order to give them the look of old wood.

Although The Cloisters itself only dates from 1932, many of the architectural elements are far older, lending the house an ancient feel.  For example, the massive, half-timbered gables on the main facade originally graced a medieval house in Donremy, France, while Mr. and Mrs. Parker acquired the pale gray medallions on the same facade from a 16th century house in Venice, Italy.  Similarly, the elaborate stained-glass door leading from the chapel to the cloistered garden originally decorated a 16th century house in Verona, Italy, and several of the doors on the first floor date from medieval France as does the beautifully carved wooden panel over the Dining Room’s mantel.  The mantels of the four fireplaces on the first floor, which feature carved geometric designs in a late-medieval style and wooden Renaissance figures, were salvaged from a chateau in Brittany, France.

In addition to acquiring antique building materials directly from Europe, the Parkers also salvaged authentic medieval pieces from the renowned Glen Ellen mansion, which once stood near the Loch Raven reservoir in Baltimore.   For example, the Gothic tracery above the windows in the Chapel and in the first-floor Solarium came from Glen Ellen as did the French doors that open from the Gallery to the cloistered garden.

Mr. and Mrs. Parker also creatively reused wood from antique furniture for architectural elements in the house.  For example, the beautiful carved paneling on the third floor still bears the marks of hinges from when the panels functioned as the doors to medieval cupboards.  Similarly, ornate panels set into the walls throughout the lower floors were taken from antique chests and date from as far back as the 15th century.

The Parkers were natives of Baltimore, maintaining their primary residence at 913 St. Paul Street in Baltimore’s Mount Vernon neighborhood, and both graduated from the Johns Hopkins University.  They had three children:   Sumner A. Parker, Jr. (who died in infancy), F. Jameson Parker (1909-1971), and Katherine S. Parker (1914-1978).  They also had several grandchildren, among them television actor Jameson Parker.  Mr. and Mrs. Parker and their older son are interred on the property.

Mr. Parker was president of the Armstrong and Parker Company, which produced ornamental ironwork (such as balconies, gates, and fences) and which was located where Lake Clifton High School now stands. Beautiful examples of the ironwork made by Mr. Parker’s company can be seen around Baltimore and throughout The Cloisters.  For example, Mr. Parker designed the railing of the stunning four-story spiral stair tower in the center of the house; the gothic-inspired banister of the library staircase; the decorative (and functional) grates on the windows of the stair tower and on the ground floor; and the balconies on the upper floors.

Mrs. Parker wrote short stories, plays, and poetry and was a member of a number of civic organizations.  She also took an active interest in the design of The Cloisters, going so far as to climb on to the roof to place clumps of moss in exactly the right places.

Throughout their lives, the Parkers frequently opened both of their homes to the public, allowing the people of Baltimore to view their remarkable collections of tapestries, rugs, porcelain, paintings, and antique furniture.  In fact, they specifically designed The Cloisters so that portions could be open to the public as a museum, while preserving the family’s privacy in their living quarters.  Visitors entered through the south entrance directly into the library where they could view the rare manuscripts there before proceeding into the gallery to examine the extensive display of tapestries and other art objects.  They could then climb the back staircase to enjoy Mrs. Parker’s collection of 18th century dollhouses on the second floor and the family’s collection of colonial-era heirlooms on the third floor.

In a final act of generosity to the city that she loved, Mrs. Parker willed The Cloisters and its contents to the City of Baltimore.  Since acquiring the estate, the city has used the house and grounds in a variety of ways.  From 1977 until the 1990’s, The Cloisters was home to a children’s museum.  Today The Cloisters is primarily an event facility, hosting 250 weddings, retirement parties, holiday balls, bar mitzvahs, and business meetings each year.  Most famously, it was the site of actor Will Smith’s 1998 wedding to Baltimore native Jada Pinkett.

In addition “The Castle,” as it is known, with its distinctive architecture and breath-taking landscape has been featured in a variety of television shows (such as Homicide, The Wire, and Ace of Cakes) as well as several movies (including Absolute Power and John Water’s Cry Baby.)

The Cloisters is managed by the Baltimore Office of Promotion & The Arts, the city’s arts council, events center and film office.